Though considered a technical climb, only one section of Baboquivari has a rating of 5.6. The others are class 4. However, having ropes for the descent is almost definitely required!

Climb up through a crack, passing under a large bolder. This is about class 4. 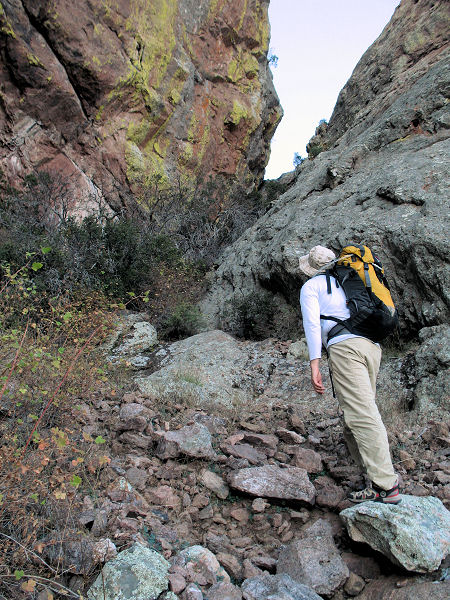 This first is about 30 feet climbing under a boulder wedged in a crack to the right. There are 2 bolts and hangers at the top of the climb that may be used as an anchor on the way back down. (Source)

Update: After climbing this myself, I say that The Great Ramp has one class 4 move in it. You certainly would not want to downclimb The Great Ramp, it is very exposed, simply rappel it. Probably only considered a class 3, this climb takes you up a sloping rock. It can be rappelled back down, just like all the other climbs. 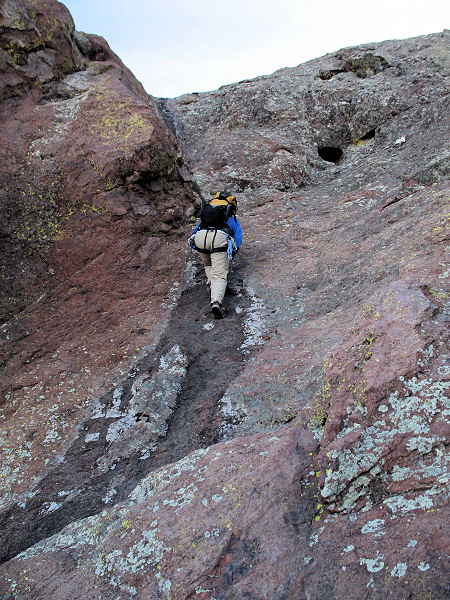 There are good hand and footholds up the short climb. (Source)

Some 3rd class climbing is engaged here, and a few old metal brackets still exist along the route. (Source)

Rising above and to our left was a bare slope of rock, the Great Ramp. Viewed from a distance, the Great Ramp makes a long left-trending sweep up this rock, and as is often the case, looks nearly vertical when viewed from afar. But now that we were upon it, it wasn't too steep, but still steep enough to demand care.

The first 30 or 40 vertical feet is the steepest. My pack was shifting on me as I scrambled on all fours, so Kelley helped by ferrying it past one small section. Past this, the ramp's gradient lessens and becomes more vegetated. We stuck close to where it meets the cliffs, and had no problems whatsoever. The ramp took about 20 minutes to climb, and we were distracted by a Border Patrol helicopter buzzing the terrain far below us, clearly following some people. Migrants? Other hikers? Us? We did not know. (Source)

The lower portion of the ramp is rather smooth rock and goes class 3. (Source)

Finally comes the true climb. This 70-foot slope is considered to be a 5.6 climb by some, although actual rock climbers say it could even be considered as easy as a class 3. However, it is an exposed climb.

The following are pictures from the bottom of the climb... 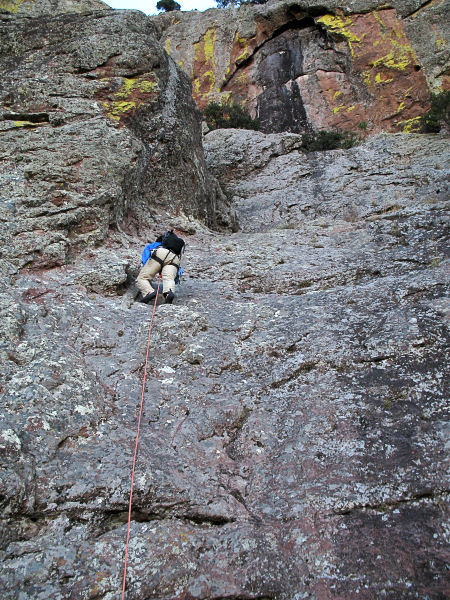 And then pictures from the top of the climb... 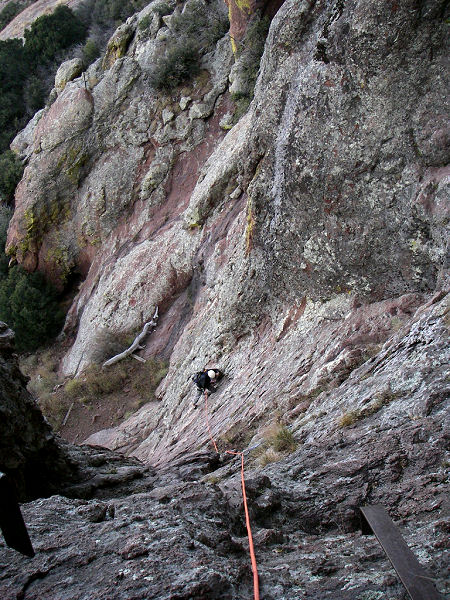 There are several bolts and pitons of varying degrees of quality (for the most part, lesser quality) that can be used for protection for the 70 foot slope. Climb up and to the right towards a small tree sticking out of the rock. There are two solid bolts connected by a chain next to the tree that can be used for a belay coming up and a rappel anchor on the way down. (Source)

Rope up, clip the pathetic bolts if you choose, and don't fall. There are small ledges the whole way up and the climbing probably never exceeds 5.5, and then only for a couple of moves. A small tree with multiple loops of webbing stands at about 100 feet of rope. [newer bolts have been installed, the tree was burnt in the recent fire](Source)

The easiest line from below angles slightly left, where there are good hand and footholds, usually just an inch deep, but very stable. The rock itself provides a lot of friction. Still, I had to think each step carefully, planning each foot placement, then where the hands would go. The first goal is a ledge about 25 feet up. Once there, I cleaned the first pro, then shimmied slightly right and started up the remainder, at which point the rock leans back ever so slightly. The next goal was a more substantial ledge, this one about two feet wide. I took off the second pro, and just willed my ass up that slope. By now, I was near an exit ramp, a class-3 chute with giant hand and footholds. I followed that up and onto a ledge, untied myself, and handed the rope back to Kelley so he could throw it down to Peavy for his turn. (Source)

Experienced climbers will find the pitch to be easy. Those who know better than me would rate it about 5.3 for the first 20-30 feet to the first ledge. Then it lies back a little and would rate (in my opinion) 4-plus, or 5.0 (To me, it's still more "climby" than "scrambly"). (Source)

The ramp leads into a use trail through trees and brush and eventually to the legendary class 4 wall. You know you are at the right place because more rusty bent pipes are sticking out of the wall about 80 feet above. A ladder had been built over this section as well. The small oak tree used as a belay point at the top of the wall is also fairly obvious. After a little study, we could also see hangers in the rock. I got on my rock shoes and started up dragging the rope. The rock here was more solid and fun than on Weavers Needle. Similar to Weavers Needle, the crux of the climb is the first 20-30 feet, although Baboquivari's class 4 wall is easier.

Contrary to the DPS guidebook, the first hanger is almost 30 feet up. Someone had also put another in beside the old one recently, but is loose. Another 25-30 feet up is another set of hangers, one new, one old. The last part of the climb to the oak tree went easier and I did not use any of the old pipes to tie in to. In addition to the new hangers, a relatively new rappel point consisting of a heavy steel chain has been placed in the rock beside the oak tree. It is the same kind of chain set-up as the rappel station just below the summit of Weavers Needle. However, using the small oak tree as a belay station to bring up Steve and John was both easier and safer. (Source)

At saddle, climb to peak

Descend back to saddle

At saddle, hike back to car

Back at car, drive home