To the ghost town

Should be a nice bike ride

Bring bikes even if you have to walk them on the way in. The glide out goes very fast. Source 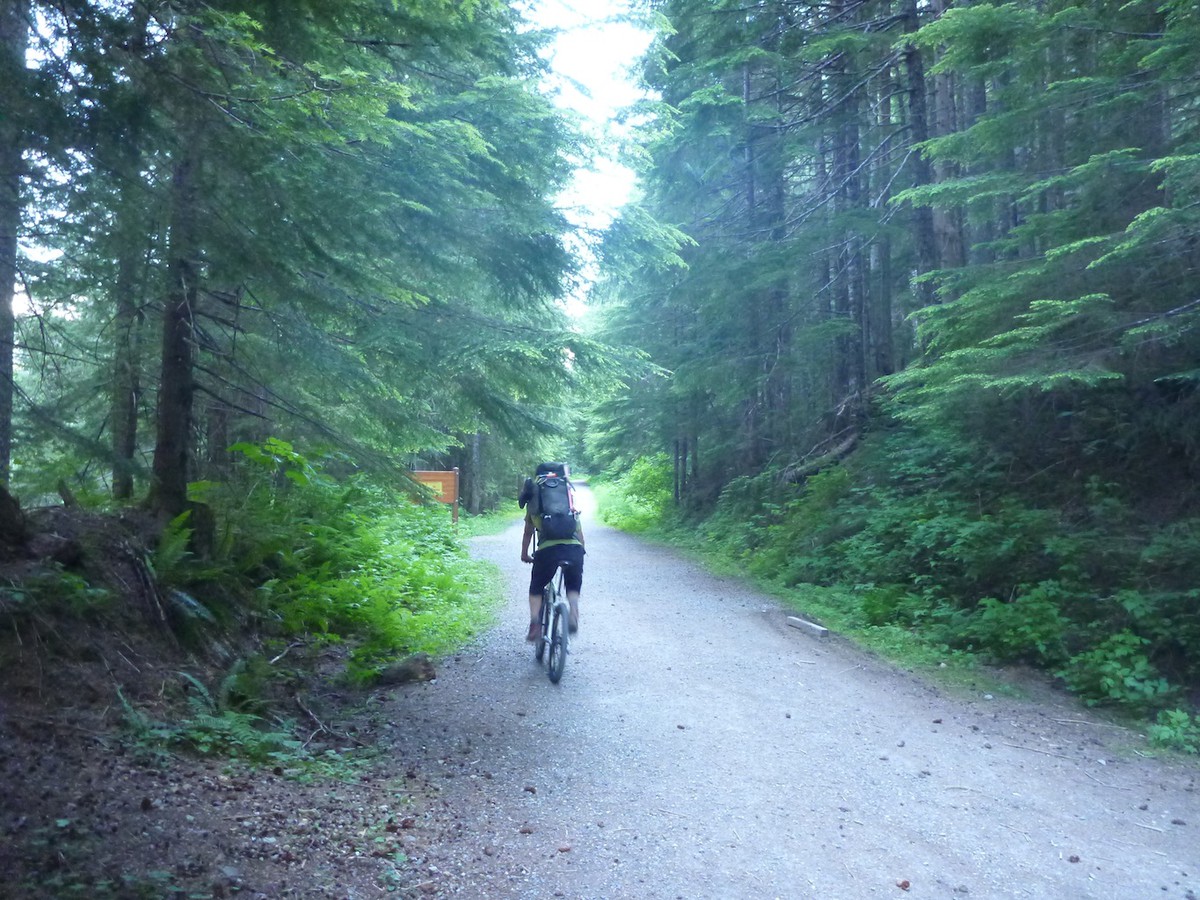 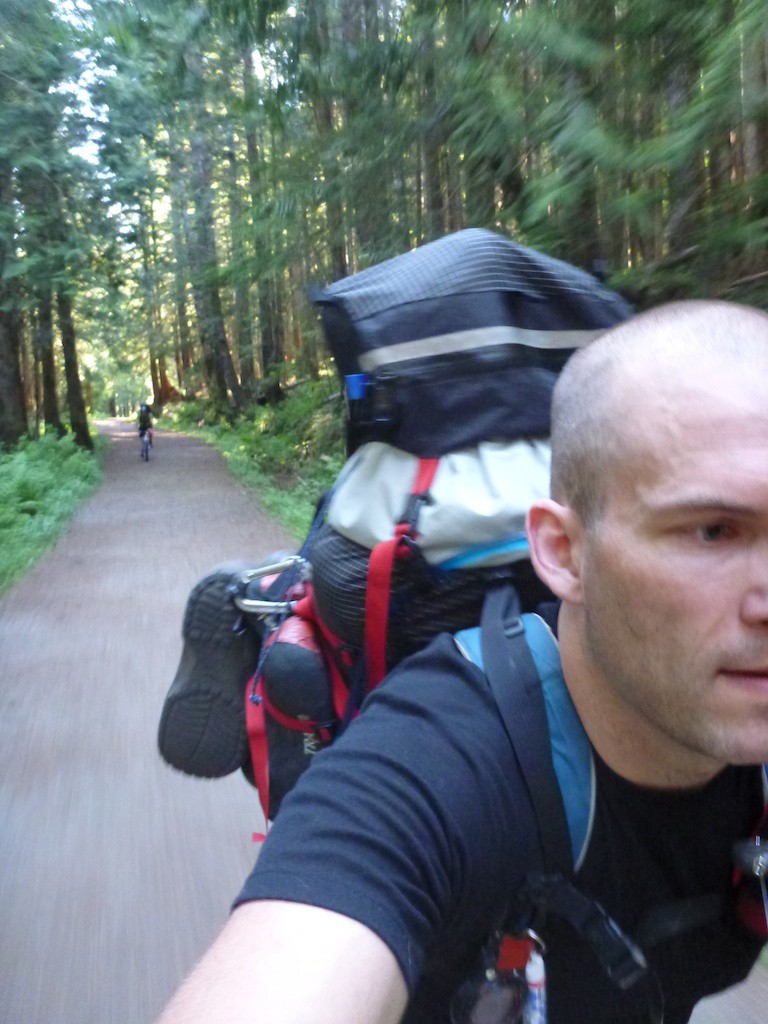 After eating lunch at the townsite we packed up for Glacier Basin. The trailhead is accessed by crossing the eastern facing bridge into Dumas St. and heading south down Dumas St. until you arrive at a Glacier Basin trailhead sign just past the Comet Mine Terminal. The register isn't much further in from that sign. The trail itself is rough and not well maintained. It's basically a bush wack most of the way, but the first section is well maintained until you start pushing heavily uphill near the main Glacier Creek waterfall section. We chose to stop at the main waterfall section for a snack and photo opportunity as Silvertip Peak was looming heavily in the backdrop. Directly after the snack break we were presented a rope climb up a slanted boulder face. It was just steep and large enough to constitute running a rope down. You'll be glad it's there, especially based on how steep the surrounding drop-offs are. Source

There are a couple developed campsites in the basin, but you shouldn't have much competition for them. Source

There are a couple of campsites at or near the end of the trail and a couple of flat spots in the meadows in the basin (plenty of streams for water) but if you roam another 20 minutes to the knoll at the back of the basin there are more and better sites up in the trees and a stream nearby for water. Source 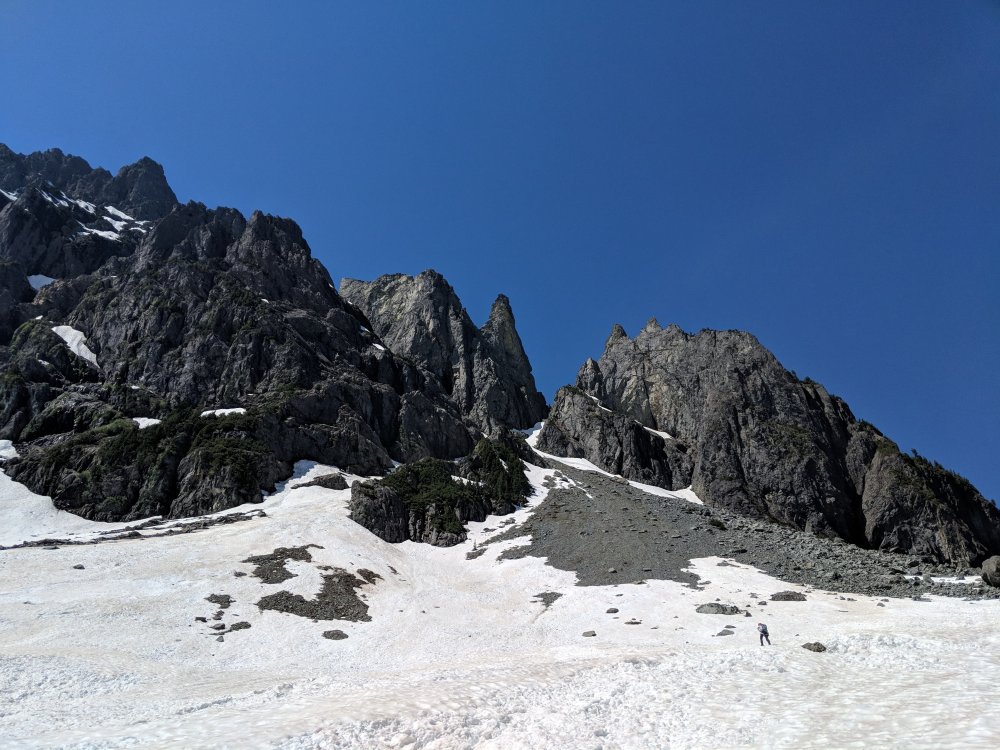 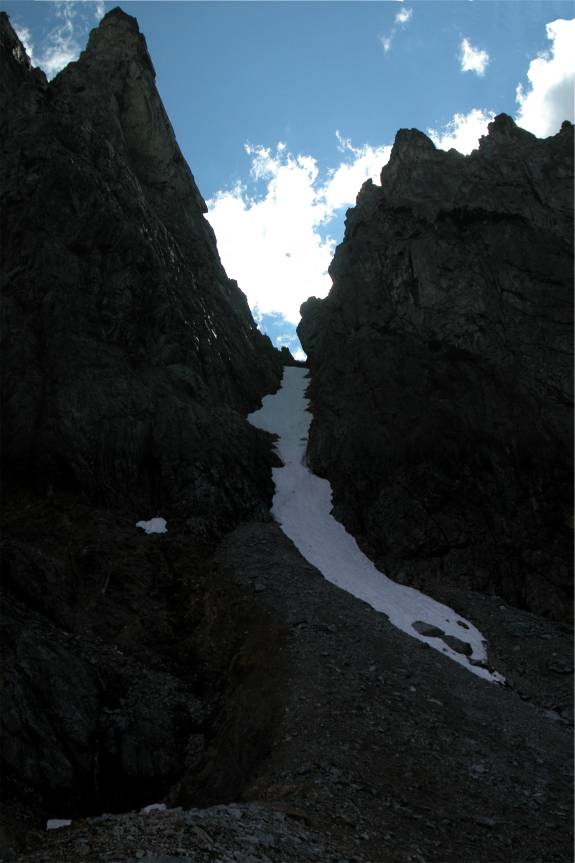 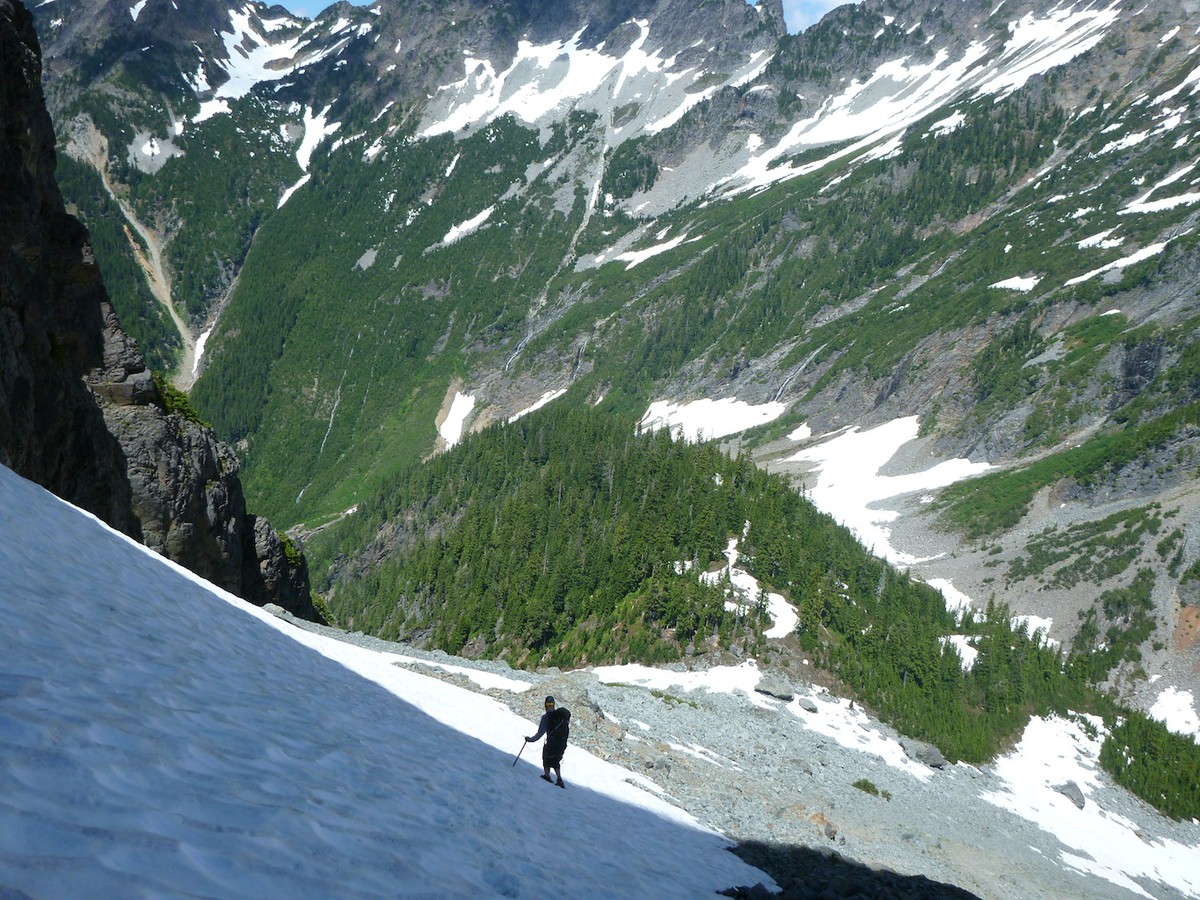 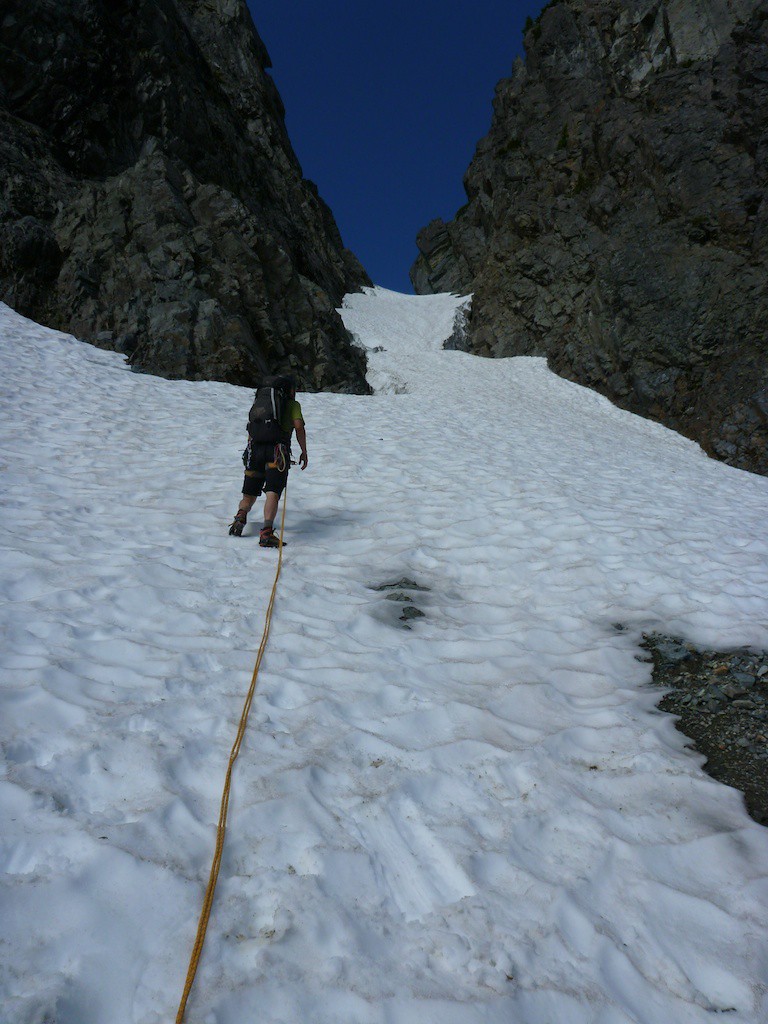 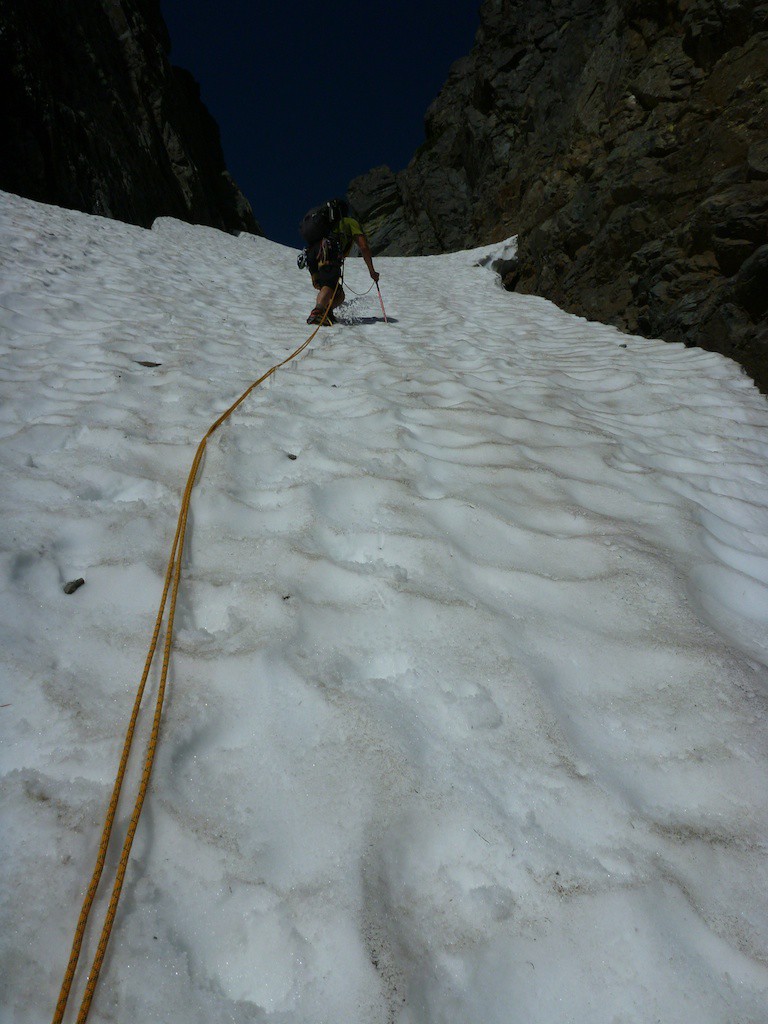 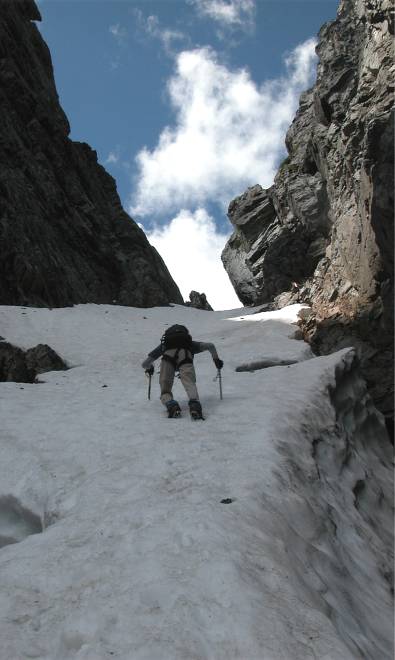 The only piece of gear I really wanted was a #2 camalot. Didn't have it. Fun uncrowded route, although that was before Select 2. Its like the Tooth with a way more interesting approach\views. Source

Ok, spire time. We dropped our axes and crampons, and hiked up Heisenberg-uncertainly-principle-talus to the col east of the spire Source

I had neglected to bring the route description with me and we almost headed up something that was not the correct route. The correct start is to wrap around the south side of the tower and proceed as high as possible on increasingly loose talus to a large notch where you can see the final rap station. Source

This involved first climbing up some low fifth-class terrain, traversing, and then down climbing about 15 feet of loose 5.5, finally followed by another traverse over loose rock at which point rope drag dictated a belay. While following I was very thankful that Jean somehow managed to get 4 pieces of pro in that short section of down climbing (more gear than the rest of the climb combined!) which made the crumbly down climb feel really safe. Source

I ascended the initial 4th class slab and 5.0 downclimb and belayed Ethan in to a tat and cord-festooned rap anchor that seemed inclined to movement despite the weight of all the tat. Source

From here the ledge we needed to get to was obvious, but how to get to it was not. So we cheated: Vincent pulled out the guidebook description. "Climb up 20ft, then left (and down 10ft) to the ledge". Ahh. I led this "pitch", which is accurately rated 5.0. Source 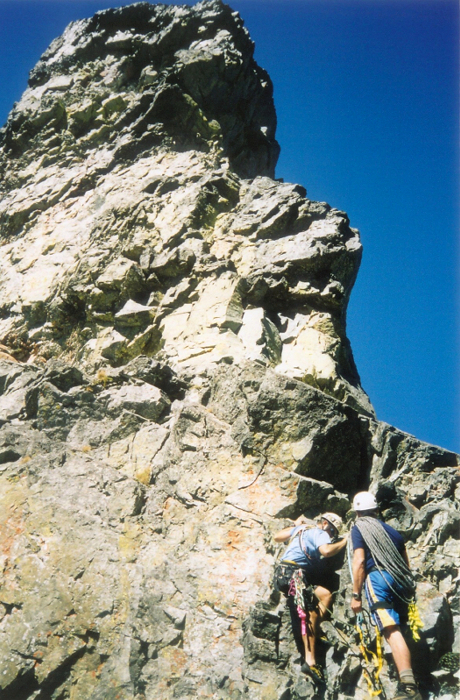 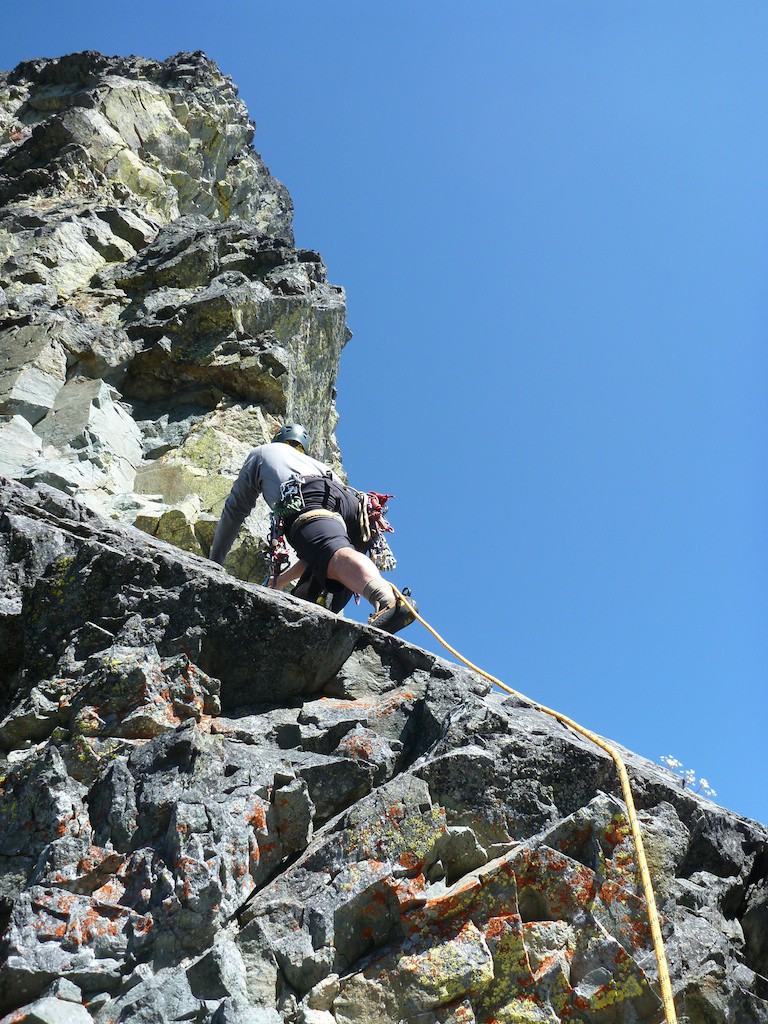 I took the next lead which zig-zagged left then right. The topo said "follow the obvious route" which of course was not obvious at all. I stopped at a decent stance which looked like it could have been the start of the third pitch and contemplated setting up an anchor. However further right looked much more promising so I committed to a thin traverse (probably only around 5.3, but felt significantly harder with all the rope drag) and found a comfortable belay spot beneath a splitter (relatively speaking) hand crack. Source

From here, it was an easy, short traverse out to an alcove where I backed up an old pin with a solid nut and cam. Source

We swapped leads again and Jean got the privilege of leading the only real section of rock climbing on the entire route. Three hand jams, one cam and a 50 foot run out later and she was on the summit. Source

The third (or second) pitch is very high quality, climbing solid,fun rock in great position. Opportunities for pro are good and the crux is well-protected by a girth-hitching chockstone. Source

Vincent continued up the final pitch - it was nice climbing (blocky face climbing on little ledges with a crack - 5.4 or so), but quite loose in spots. Source

The descent is straightforward, though a bit dodgy. The first rap is off two rusty, "vintage" pitons. The three rap rings on the brand new sling are a nice touch, but a bit superfluous. The second rap is off a somewhat suspect block draped in nearly enough tat to count as a Halloween costume. There are also bleached strands of webbing heading off to other blocks. The third rap is off another somewhat suspect block. However, someone has left a climbing rope tied around an even larger, adjacent block. After verifying the line was intact, we rapped off this, rather than our own rope. According to the party that headed up after us, pulling the rope on the last rap tends to generate rockfall (there is a lot of loose on the ledge) so rapping the "fixed" line or reverse leading the first pitch is probably preferable. Source

After relaxing for half an hour, we made two raps back to the base of the first pitch, and back-tracked the first pitch unroped (it's easier going backwards). Source

Two rappels brought us safely back down to the ramp where we had set up the first belay. The other party of three we had met back in Glacier Basin was just wrapping up the first pitch (the third, least experienced member was actually sitting out the actual climb back at the upper notch). One more exhilarating, overhanging rappel brought us down to the talus slope just below the upper notch where we had roped up earlier. Source 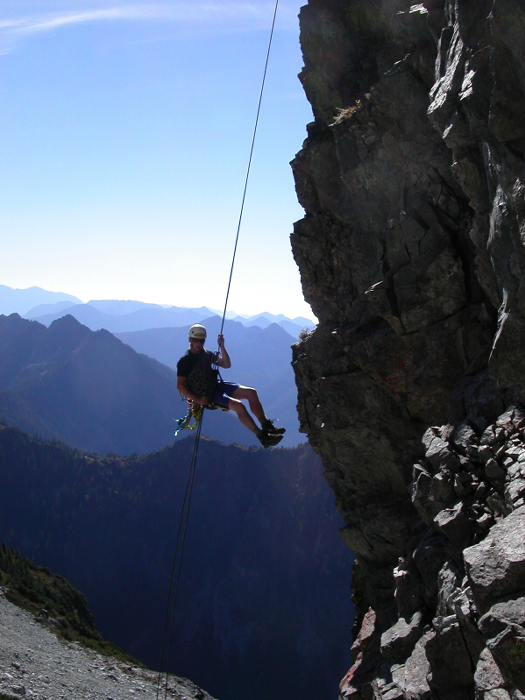 We descended carefully back down to the lower notch. A double-rope rappel allowed us to bypass most of the unpleasantness in the gully, leaving only a short, but sketchy down-climb to reach the relative security of the ice blocks lodged at the constriction. Hiding behind a large block of ice, I waited for Andy, then James to descend the gully. At the bottom of the snow finger, I noticed a V-thread that the previous party had undoubtedly made and used to rappel the final wet step at the bottom of the gully. With some apprehension, I watched Andy rappel off the V-thread. I went next, followed by James. As I retrieved my stashed trekking poles, Andy, who was re-packing his gear, helplessly watched his helmet tumble away into a nearby drainage. Source