There is a fairly well trodden path between the Stuart Lake trail and the upper basin of Mountaineers creek, but it can be hard to follow due to considerable dead-fall. In general, after leaving the Stuart Lake trail at that trail's first switchback, crossing the creek, and avoiding the swamp, it closely follows the west bank of Mountaineers Creek all the way to the talus field below the upper basin that starts at around 5,400'. The east bank may look tempting at times, but it becomes more brush higher up and the trail on the west bank is far faster. Having lost the trail early on way up, and staying mostly on it on descent, we can say it's worth the little bit of time it takes to stay on it, because it is much faster going (saved us roughly 30 min. on descent). Source

fantastic flat sandy site on bench at about 5800', just downstream and 50' above moraine in upper basin of Mountaineers creek. Source

We found some water around 7,000 feet and filled up since it would be our last chance for a while. Source

You have to camp above the Stuart Zone which ends at about 5,200 ft 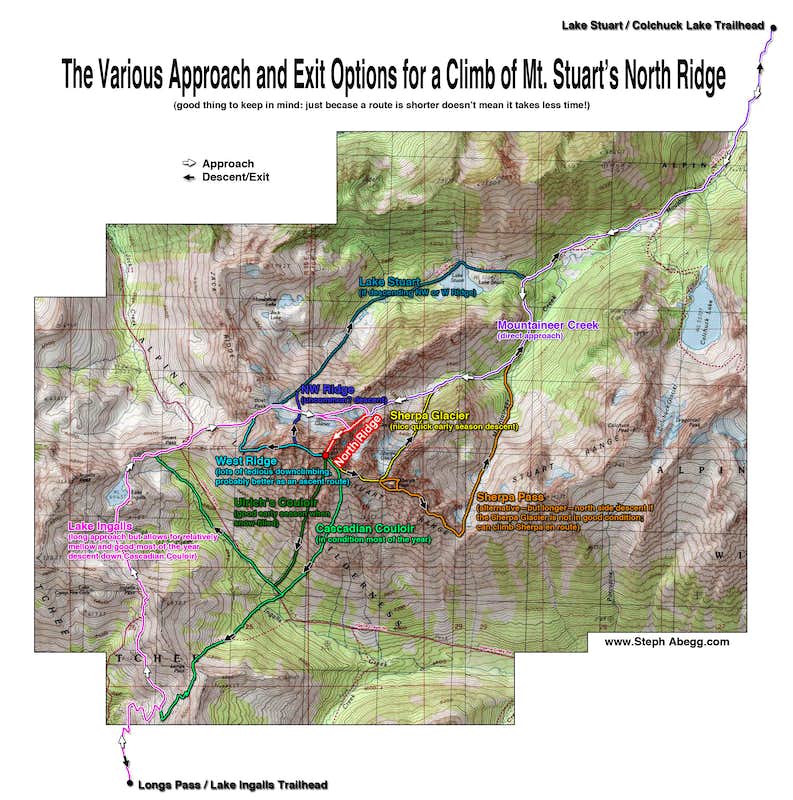 For our descent, we made a very short 30 foot rappel down the final pitch of the standard west ridge route from the large anchor just west of the summit. We then began descending class 3 terrain down a gully trending skiers left (southeast) and after a short 20 foot rappel off a slung boulder to get below a couple huge blocks (optional...low 5th to down climb), we reached a large ledge just before it steeply dropped off around 8,000 feet elevation. We cut left and headed east, over a small rib following goat tracks and reached a notch in the east ridge of Sherpa itself with a steep gully heading down the north side. When snowy, this gully is a descent option but when dry it was hard packed dirt over 50 degrees in steepness...not an option!

Instead we descended 800 feet down to the south from this same notch and continued working skiers left crossing below a series of large ribs. Once we reached the 7,000 foot level, we traversed horizontally, and reached the very large, broad gully marking the last gully before the Sherpa/Argonaut saddle. A short 100 foot ascent brought us to the saddle where Jacob was happy the descent was much easier than what previous descriptions had mentioned. It was mostly class 2, and the first 500 feet below the summit sustained class 3 with a couple short raps. What I thought the worst part of the descent was yet to come. Dropping the 1,000 feet off the Sherpa/Argonaut saddle sucked. Lots of loose rocks barely held in by dirt and sand. One bucket sized rock even came tumbling down and almost hit me had I not dove out of the way just in time. Once we managed to get back to treeline, after much boulder hopping, the rest of the hike out was uneventful. Burritos at South's in Leavenworth afterwards was excellent. Source

Times from other people