Apparently this is the "classic" route

John and I climbed the South Buttress of Cutthroat Peak in 15 hours car to car on June 17th. Source

2 hours according to a guide service.

You start with a creek crossing

John and I left the car at a very reasonable 6am. Experience from other climbs in this area has taught me that pre-dawn starts are not worth the trouble. This reasoning stems from the fact that finding appropriate stream crossings is much more difficult in the dark â€“ and falling in a stream is a bad way to start the day. Once we left the highway and dropped into the forest, we had to search to find a decent log to cross the creek on. Eventually, we found a crossing upstream of where we found the creek. Source

Once we broke out of the trees, we followed a well-defined trail until we gained the lower flanks of the mountain, avoiding most of the snow. Source

With some stout 4th class scrambling, we joined the â€œleft-hand gully,â€ which is the traditional approach to the ridge crest. We joined the gully fairly high, where the snow had already melted out for the summer, so we cached our crampons, ice axes and some other gear before continuing the scramble up to the notch. Source

We began climbing the approach gully, but ran into sketchy feeling under-cut snow. We had to find another way. We came back down the gully and found a place where we could get on rock between the two prominent gullies. It was slabby, down-sloping, wet, mossy, and littered with kitty litter. Fun stuff! It actually felt pretty sketchy. Source We re-entered the gully, and continued up, but soon ran into more trouble. The upper gully gets super narrow, and had the perfect amount of snow in it to screw us. There wasn't enough snow to use it to travel, but the moat between the snow and the gully wall was way too tight a squeeze for us. Time to turn around and try something else.

Luckily for us, we figured out that you could climb a long pitch of low 5th from near the top of the gully, out climber's left, that gains the ridge. We pitched it out. The climbing was mostly pleasant and well protected. Im not sure why this isn't the standard way because it avoids the difficulty of the narrow gully/slot and the 5.7 moves to exit it. Source 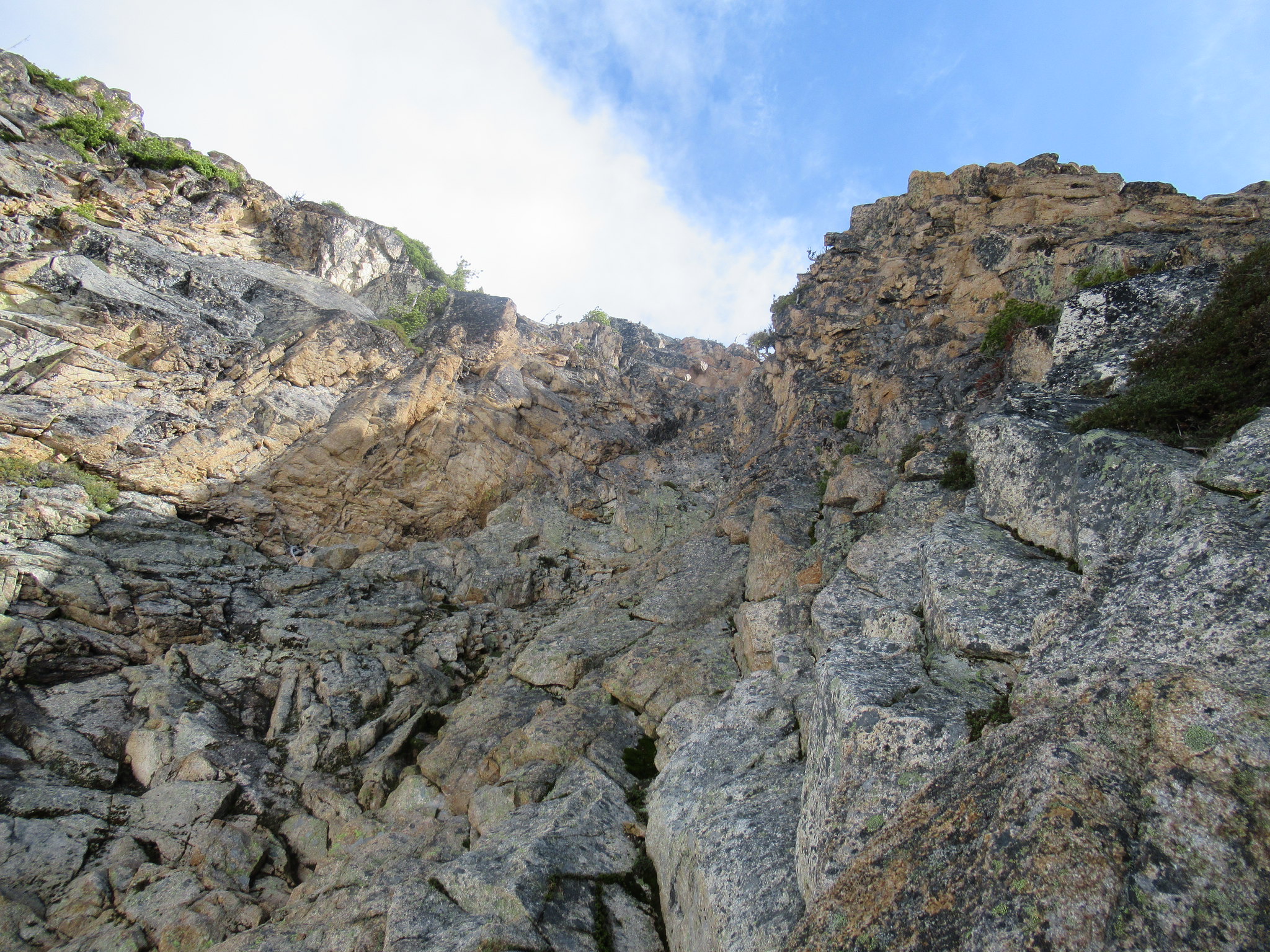 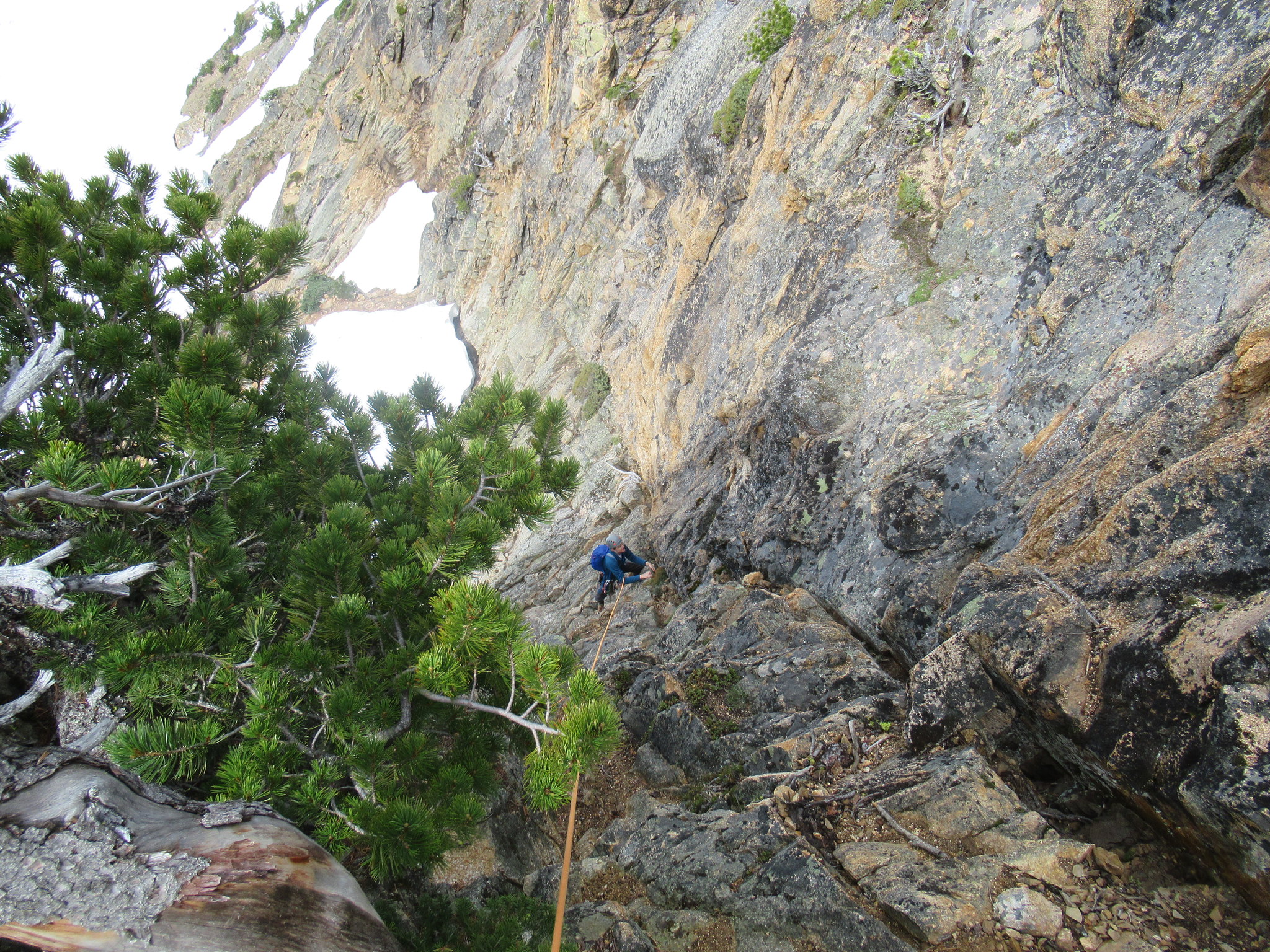 This route is characterized by lots of low 5th class climbing interspersed with short sections of 5.7-5.8 on mostly solid rock. There are a few loose and sandy sections of rock. Take care not to knock anything down on your partner or other climbers below. The whole time you are climbing to what appears to be the summit, you are actually climbing to a sub summit, the â€œTwo Humpsâ€ that are actually sub-summits of the true summit. This can be a small mental blow, with a few cruxier sections still to go, but the rock quality only improves and the route finding gets more straightforward. Source

John lead out from the first belay. We simulcimbed 4 pitches to the point where the entire wall started to steepen. Source

The climb begins with several hundred feet of scrambling up the approach gully that culminates with a steep pitch of low fifth class that ends on right on the ridge crest at the base of the buttress. Source

From there, many short pitches of low fifth class climbing with a couple of harder pitches thrown in, lead up to the false summit. From here, a short descent, and then a couple of final airy pitches lead to the true summit. Source

You should actually descend the West Ridge.

We made 12+ rappels and did some easy downclimbing to recover our gear. Source

Getting down offers a couple of descent options; either down the west ridge via several rappels and a lot of downclimbing, or via more than a dozen rappels back down the South Buttress. The latter offers the advantage of allowing climbers to cache gear and/or shoes at the base of the technical climbing, though the former is probably a little faster. Either way, the South Buttress always makes for a full day of climbing in a spectacular setting with far fewer crowds than many of its more popular neighbors. Source